Changed, But For the Better 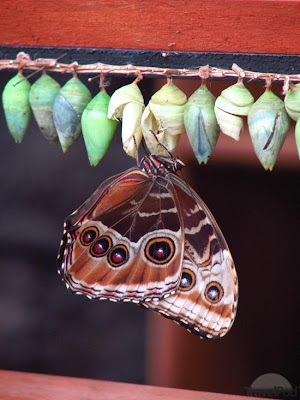 What kind of crazy author takes an indefinite hiatus from her largest audience (Facebook) only 24-hours before her latest book's scheduled release? Oh, yeah--that would be me. There's a very good reason for it. I promise.

Withdrawing from social media may not seem like the wisest thing to do in the midst of a publicity push, but it was something I had to do in order to get over the last few potholes on my journey back from Crazytown. I bet you didn't know that I'd been on a long and arduous trip these past two years, did you?

Believe me, it was no pleasure cruise.

I started my voyage at 10:14 PM on August 8, 2011. That's when I got the phone call that my mother was on the way to the hospital in the back of an ambulance and my brother was under arrest for her attempted murder.

Sparing you the disturbing details, let's just agree that the fallout was graphic. The stuff of horror movies or detective novels--more blood than you can imagine, more police inquiries than there are hours in the day, time spent in the ICU, multiple surgeries, and all of "normal" life put on hold until the pieces could be put back together again.

After The Incident (to which the whole situation is now referred) I felt completely disoriented. I withdrew from social activities, avoided going out of the house, and really just started driving myself crazy. This went on for about a year before I finally saw a therapist--a step that I made because my writing and visual creativity seemed to have dried up.

I was diagnosed with PTSD and subsequent depression. Cleaning up the gory crime scene myself probably wasn't such a good idea, I suppose...

My journey back to being a functioning member of society was difficult, but I did it without medication. I got a part-time job as a tour guide so I would have to get out of the house and talk to people, whether I felt like it or not. I started writing my Morning Pages again (thanks, Julia Cameron.) I set some new goals for myself to act as indicators that I could still create. Finishing Underground was at the top of that list.

Now that the book is officially DONE and has fledged the nest, I'm taking some time to sort my head and my home to celebrate. I've cleaned out cabinets and closets and all sorts of nooks and crannies as a symbolic gesture of purging the mental funk that has dominated my life since that August night two years ago. I've also been casting off lots of negative thoughts and feelings that came along with that funk--a process that would have been slowed or even halted if I'd been distracting myself with Facebook or other marketing and publicity outlets during this surreal time of celebration.

While I certainly feel that completing Underground is an accomplishment in itself, I feel that it's more a symbol of where my life is right now. It's a testament of my return from Crazytown. Do I think that I'm sabotaging my hard work on the book by neglecting this delicate publicity time immediately following its release?

Maybe, but it's totally worth it.

*Note: If you're reading this at Facebook right now, you can thank the magic of RSS feeds!
Posted by Beth Brown at 8:19 AM