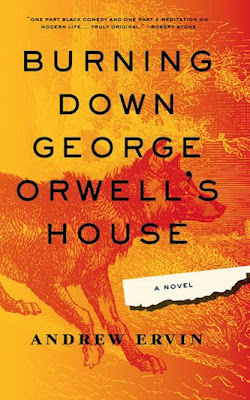 Ray Welker is a Chicago ad man who gets out of the game and sells nearly all of his worldly possessions to rent for six months the house where George Orwell penned his iconic 1984.

In middle-of-nowhere Scotland, author Andrew Ervin introduces us to a quirky cast of characters who, whether intending to or not, force Ray to face his demons and find the next direction for his life. While there may or may not be a werewolf hunt, there is definitely a never-ending supply of single malt and self-pity.

Erwin created a laugh-out-loud novel about a man's climb out of what could have been either a slow-building moral dilemma or (possibly and) a sudden midlife crisis.

Whatever it is, it totally works.

Ray Welker does a lot of reflecting on that tiny Scottish island and eventually finds solutions to his problems--something I feel we can all strive to do ourselves. As a character, he is very flawed, very real, and just the kind of guy you hope will eventually make the right decisions, so the novel comes to a satisfactory conclusion (even if it's not quite the one you expect.)

If you like your stories a little weird, full of boisterous characters, and with a touch of danger, Burning Down George Orwell's House is definitely worth your time.

P.S. - You may not want to drink at the same table as a man named Sponge.
Posted by Beth Brown at 9:00 AM